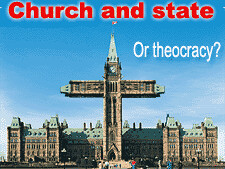 An unneeded and overwrought bill allowing students to freely express religious ideas in Oklahoma’s public schools couldn’t even get one opposing vote this week.

On Tuesday, the Oklahoma House voted 88-0 to pass House Bill 2422 or the Religious Viewpoints Antidiscrimination Act, which codifies and encourages religious intrusion in government public schools. On a larger level, the bill clearly violates the Oklahoma Constitution and the basic federal tenet of church and state separation. On a pragmatic level, it opens our schools to deep religious conflict among students and teachers that distracts from the basic educational mission.

How can anyone possibly reconcile that clear statement with the language below taken from HB 2422?

A school district shall treat the voluntary expression of a student of a religious viewpoint, if any, on an otherwise permissible subject in the same manner the district treats the voluntary expression by a student of a secular or other viewpoint on an otherwise permissible subject and may not discriminate against the student based on a religious viewpoint . . .

The “religious viewpoint” (keep in mind this could be from any religion) could obviously be simple proselytizing on and/or using government-owned property sanctioned by government-paid authorities. A student might speak at a graduation ceremony, for example, about how her belief in Jesus Christ helped her earn high grades and urge others, directly or through simple implication, to adopt her views.

This obviously would be in violation of the state constitution’s prohibition against using state money and property, “directly or indirectly, for the use, benefit, or support of any sect, church, denomination, or system of religion .  . .” It’s an obvious lawsuit waiting to happen.

But it’s the pragmatics of the bill that should concern everyone, especially parents of school-aged children, even more. The bill essentially sanctions the dissemination of religious ideas at student assemblies and other gatherings, allows for the expression of religious ideas in assignments and homework and allows for student religious clubs and events. School districts, under the bill, “shall adopt a policy” that ensures all this happens.

What if students wanted to express the views of Satanism? We’ve seen how that issue has already emerged with the unconstitutional Ten Commandments Monument now adorning the state Capitol grounds.

What should a teacher do if a student submitted a paper or an assignment that was simply a religious screed disavowing basic scientific principles? I guess it would depend on their own religious views and/or the religious views of her administrators, but why even put a teacher in this position?

I don’t think it’s a stretch to argue that the intent of this bill is to encourage the use of right-wing, fundamentalist Christian dogma as a replacement for intellectual discovery and critical inquiry in our public schools. Christianity is the dominant religion in this state, and it’s fair to say that right-wing religious folks, including many extremists, are in control of state government right now.