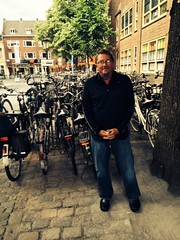 I’ve been in Utrecht, Netherlands two days now, and so far I find it filled with beautiful people intent on killing American academics like myself with their bicycles.

Seriously, I find the use of bicycles here fascinating and wonderful. Everyone, and I mean EVERYONE (sure, a sweeping generalization but  . .  . ), uses a bicycle for getting around the city. They ride in ones, twos, threes, sometimes two or more on one bike, and sometimes in extremely large groups that defy imagination. They ride fast and urgently. They are in a hurry on their bikes. They got to get there, wherever there is. They ride in tailored suits and stylish dresses. They carry dangling, smiling children like rag dolls in the handlebars of their bikes. This is fantastic for sustainability because it conserves fossil fuels and reduces pollution. Most of the bikes people ride here are just basic models they might lock up at the train station, say, if they need to take a longer trip in the area or in the city center to go dining or shop. This combination of bicycling and public transportation is obviously a great model for all of us in the world, and it keeps people in shape. That’s why so many people here are beautiful, both men and women. They are in shape and take care of their bodies.

But it’s not always so great for those of us here temporarily, those of us who have to navigate around the city especially because of work-related obligations. If you happen to temporarily get in the way of a bicyclist, they ring their handlebar bell incessantly at you, yell something out in what I see as the increasingly dead language of Dutch-probably an obscenity-and then look at you as if you’ve just committed murder. There are no clear signs of where to walk. The beautiful bicyclists themselves follow no discernable rules, which I’m sure are coded in the Dutch DNA they have so historically coveted to exploit other people throughout the world, and, okay, I’m sure there are certain codified bike rules, but maybe they could put out a brochure or something for visitors. It’s all so maddening, but in a European-adventure type of way. It really is thrilling to be on the verge of getting body slammed by a bike every two minutes or so. It keeps the blood flowing.

In the poem “Under Ben Bulben,” W.B Yeats writes:

Even the wisest man grows tense

With some sort of violence

Before he can accomplish fate,

Know his work or choose his mate.

I’m pretty much at that point right now here, and I’m not a huge Yeats fan or even believe in the philosophy underpinning those particular lines of poetry. I just need it to survive mentally for the next few days. If I get body slammed by a bike I may die or I may achieve greatness in my lifetime. It’s a risk I have to take because my university is paying for me to come here.

I also love the way people here conserve. For example, at my hotel’s breakfast buffet, a wonderful feast by the way, they only have one small carafe of water sitting on one table. People have to get up to get their water. The water glasses themselves were cocktail-like small. The carafe was constantly refilled so water was readily available so you could drink your fill, but no server was hovering over each diner constantly refilling their water glass when it got half empty or whatever. This seems like a wee point for sure, and I can hear the snickering four thousand miles away, but how much water or how much food do we waste in the United States under the guise of “good service” or simple gluttony or just plain stupidity? There are better ways to conserve that just make sense. This is one of them.

I just gave a presentation on the late author James Joyce at Utrecht University this morning as part of the XXIV International James Joyce Symposium. My presentation, “An Intellectual Fetish? Bloom as the Queeric Cuckold in James Joyce’s Ulysses,” deals with some of the more intense sexual elements in the exiled Irish author’s masterpiece novel. These sexual ideas were considered more intense back in 1922 than they are now, but they did stir major controversy that led to a major lawsuit in the U.S. Joyce’s genius pushed Western culture forward to enlightenment and Ulysses itself invented literary modernism. My argument tries to deploy a correction to a prevailing academic view that Joyce’s famous character Leopold Bloom is perverse and reflects Joyce’s own perversions as shown letters he wrote to his longtime partner Nora-later his wife-in the early twentieth century. In fact, I find Bloom’s sexuality, primarily depicted in his fantasies, as rich and sublime, and I’m using literary criticism known as Queer Theory to frame my arguments.

Unfortunately, I was blatantly censored by having my presentation cut short during my actual talk for reasons that I believe have to do with a bias that prevails among the Joycean studies power structure right now. I was unable to talk about crucial evidence of how former Joyce scholars have simply depicted the famous author as a pervert, which, in turn, has marred readings of his work. In fact, I think Joyce’s diverse sexuality enhanced and even drove his genius. I have textual evidence to support that claim. What’s so amazing about all this is that Joyce himself was censored throughout his life.

I guess there are extremely sound and financial academic reasons for having the conference here in Utrecht, and, of course, inside the intellectual bubble most professors don’t concern themselves publicly with everyday, contemporary political realities.

I WILL publish the paper, even if it takes the tenacity Joyce used to get his work printed, but it will have to go in a publication outside the Joyce-academic machine, controlled by older scholars who probably can’t have sex anymore and prudish heterosexuals who honor reprosexuality as some privileged status of humanity.

Back to Utrecht. The city center is beautiful, but the overall place is no destination place, folks. I’m here because of James Joyce, not Utrecht, which even with all its sustainable bicycles, beautiful people, wonderful restaurants and historical and quaint charm-the cobblestoned streets, the older, well-maintained buildings are wonderfully gorgeous-can’t overcome Netherlands’ deeply racist history and its particular complicated relationship with the colonization and oppression of South Africa, whatever the contemporary current denial is in vogue to qualify it here right now. I hope to connect with more locals to get their view on this topic, but certainly all in the spirit of intellectual engagement and progress and sincere friendship. It’s not like the United States doesn’t have its own ugly racist issues, but we do have a two-term African American president. I voted for him both times.

I also want to ask Dutch people here, in particular, what they think of Zwarte Piet, the country’s beloved holiday racist caricature.

Meanwhile, I’m extremely worried I’m going to get seriously injured or even killed here by a bicyclist. There are worse ways to go I guess, and at least I’ll be dying for the good cause of sustainability, right? I have to stop writing now and go get another glass of water because I’m composing this as I eat another wonderful Dutch breakfast. I hope I don’t lose my train of thought as I hydrate and forget that last good point I was going to make
. It’s an important one. It could change the world.