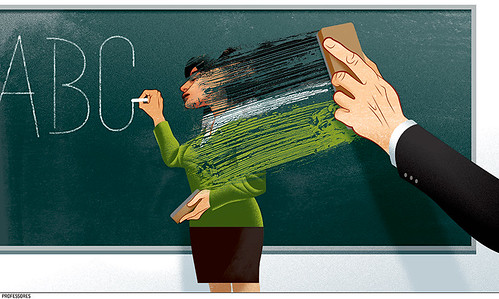 The Oklahoma teacher shortage crisis continues to worsen, and its impact on current students can’t be underestimated or presented in overly hyperbolic language.

State leaders, mostly Republican legislators and Gov. Mary Fallin, have failed to respond appropriately to the emergency by raising teachers’ salaries and enhancing their working conditions. In fact, Fallin and most of her fellow Republican leaders’ intention seems to be to do as much damage to our public schools as possible in order to privatize our basic educational system and turn taxpayer money over to private schools and companies.

Let’s be clear: All current public school students, even in the richest school districts, are affected by this leadership failure. It means fewer teachers and overcrowded classes. It means fewer programs. Overall, it tells the nation Oklahoma leaders care pretty much less if not the least of all about education than most states in the country.

The Oklahoma State Schools Board Association recently released the grim results of a survey of school districts it conducted during the first two weeks of August. The districts represent 80 percent of the state’s public school population. A news release from the organization about the survey first notes that there are about 1,000 teaching vacancies in the state and that 600 teaching positions have been eliminated since last year.

Here are the “highlights” of the survey:

About 75% of school leaders say hiring teachers was more difficult this year compared to last year.

The shortages are widespread, regardless of the district’s size and location and the subject area.

Almost half of districts expect to increase class sizes.

About one-third of school leaders said their schools likely would offer fewer courses this school year.

School leaders are deeply worried that the overall quality of teaching applicants is having a detrimental impact on student achievement.

Many newly hired teachers need extensive support and training, which increases pressure on school leaders who have limited time and resources with which to provide support.

Oklahomans need to know these basic facts as well: (1) The state has cut public education more than any other state since the economic downturn in 2008. (2) It has the lowest per pupil spending average than all of its neighboring states and in the region. (3) It has ranked in the bottom five-sometimes as low as 49th-for average teacher salaries for years.

It’s a no-brainer that Oklahoma’s anti-education mentality, combined with the current Republican dominance of state government, lead to increased social problems, high incarceration rates and low college graduation rates here. These are issues that affect us all in one way or another.

Only a seismic shift in the political milieu here will change things, and, frankly, that seems difficult to imagine. Meanwhile, mediocrity only creates more mediocrity. It’s a cycle that spins out of control for now. Sure, the state has some high-achieving students and schools, but it needs more, along with a renewed commitment to students at risk.

Our state leaders seem intent on starving our schools of needed funding and obsessively pressing a high-stakes testing agenda so they can claim public education is failing here. This way they can try to break teacher unions and turn tax dollars over to private schools or companies. This isn’t a conspiracy theory. This is a GOP political agenda.