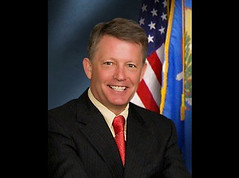 The recent stabbing death of Oklahoma Labor Commissioner and Republican Mark Costello seems at first as inconceivable as it is horrific.

But what’s very much conceivable and, in its own way, very much horrific, is the anti-health care agenda  promoted by Costello’s own political party, the GOP, here in Oklahoma and across much of the country.

These two points intersect because Costello’s son, Christian Costello, 26, has been arrested in his stabbing death, which occurred a few days ago at a Braum’s restaurant and store in northwest Oklahoma City. Christian Costello, according to media reports, suffered from severe mental illness, which included schizophrenia. Oklahoma has historically underfunded its mental health system, but that has been compounded lately by the Republican Party’s demonization of the Affordable Care Act (ACA), which requires most health insurance plans to cover mental health treatment and Oklahoma’s obstinate refusal under a state government dominated by the GOP to expand Medicaid under the ACA.

In fact, here in Oklahoma, Attorney General Scott Pruitt has made his political career about suing the federal government over the legality of the ACA. He gets cheered on by many of his fellow Republicans and The Oklahoman editorial board, and the suffering continues.

We might assume that Costello, 59, was able to financially afford any possible treatment received by his son, but the problem is local access to quality care. The fewer dollars available overall for mental health treatment in any given jurisdiction or state will mean fewer quality options for patients. So, in the end, it really won’t matter how much money potential patients have unless they can seek treatment in a more enlightened state that realizes mental illness is a significant part of our culture that needs to be addressed quickly and efficiently whenever it surfaces. It’s good for the patient; it’s good for the entire society. When we treat mental illness, we lower criminal incarceration rates, for example.

I’m not suggesting, either, that there aren’t some great mental health providers here. The late Costello just four months ago gave a speech in which he apparently lauded local mental health advocates and, according to a media report, said this about mental illness, “And we must be understanding and understand that society cannot ignore this problem, and if it does so, it does so at its peril.”

Those are the truest of true words, but most of Costello’s fellow Republican leaders here seem to dismiss the notion of “society” in favor of “individual responsibility” even when it comes to people so incapacitated by mental illness they can’t afford medical care for their condition or they can’t get it because they don’t qualify for government assistance or they can’t find it because it doesn’t exist.

People might accuse me of politicizing Costello’s brutal killing too early, but it’s NEVER too early to talk about the failure of Oklahoma to address its mental health and drug addiction issues. My heart goes out to the Costello family, and I wouldn’t be surprised if eventually family members speak out more publicly and productively about the problem of mental illness in general. But nothing substantial is going to happen here in Oklahoma with the current prevailing GOP mindset about health care in general.