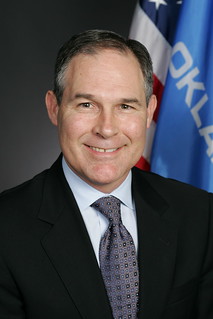 In any given state, an attorney general is that jurisdiction’s top legal advisor but has historically been considered the main protector of consumer rights, especially when it comes to widespread fraud or damages committed by businesses.

Attorneys General of both political parties, of course, have used their office to promote political ideology and further their career interests, which can obfuscate their legal impartiality, but I’ve also considered the office itself as one that primarily performs mundane legal tasks and investigations and speaks up for people when they encounter financial fraud.

Then there’s the very public case of Oklahoma Attorney General Scott Pruitt, who has made a career out of suing the federal government over Obamacare and Environmental Protection Agency rules while promoting extreme political positions opposing abortion, same-sex marriage and the separation of church and state.

Pruitt’s latest two antics are real head shakers. He recently continued his legal fight to keep the Ten Commandments monument on state Capitol grounds and he, along with Michigan Attorney General Bill Schuette, has sent out a letter to governors in all states that urges them to sanction Iran. That’s what our Republican attorney general is up to these days.

What about all the earthquake damage to homes and other property, including the state’s infrastructure, which has been caused by the fracking boom in Oklahoma? What about possible damage to the state’s bridges because of earthquakes? Don’t expect much from Pruitt in this regard because of his cozy relationship with the oil and gas industry.

The Oklahoma Supreme Court, as we all know, recently ruled that the Ten Commandments monument at the state Capitol was in violation of Article 2, Section 5 of the Oklahoma Constitution. The court ordered the monument moved off Capitol grounds, but Pruitt has now fired back with a legal filing in Oklahoma District Court that says the ruling is hostile to religion and violates the First Amendment of the U.S. Constitution.

The filing is a waste of time and state resources.

The American Civil Liberties Union of Oklahoma, which brought the initial lawsuit, has pointed out that the ruling was based on the state’s constitution, not the U.S. Constitution, and the organization’s legal director, Brady Henderson, called the new filing “frivolous and desperate.”

The letter to the governors is in response to the White House announced deal between the U.S. and Iran. Here’s a basic description of the proposal: Under the proposed agreement, Iran would agree to not build a nuclear weapon. In exchange, the U.S. would drop sanctions against the country. The agreement includes inspections and other safeguards.

Overall, at this point, the U.S. has nothing to gain by continuing hostilities with Iran. Pruitt, of course, is entitled to his opinion and can express it, but urging the states’ governors to bypass a possible U.S. agreement with another country is just not a crass political move it also calls into question separation of powers between the states and the federal government.

Does Pruitt really think he can micromanage the foreign affairs of the federal government from his office in a flyover state, a state that is often considered a laughing stock on the world stage because of the antics of its elected politicians, such as U.S. Sen. Jim Inhofe, or all of its dismal rankings on social issues? The same goes for his legal battle against the Affordable Care Act. Or is it that he knows his Republican voter base here in Oklahoma will bask in the Obama-hatred however irrational it might manifest itself?

Meanwhile, as I mentioned earlier, our earthquake crisis continues here because of an element of the fracking process, according to scientists, and our state leaders, such as Pruitt, need to do more in an effort to stop the quakes and establish liability for any financial harm caused by the ensuing physical damage. That’s one of the very REAL major issues facing Oklahoma these days. It’s not the placement of a religious monument. It’s not a possible agreement with Iran and the federal government.