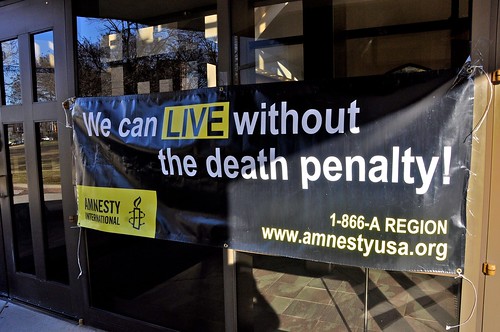 The stark disconnect between the responses to Richard Glossip’s pending execution by high-level state leaders compared to the responses by well-known and influential people outside the government creates another huge image flop for Oklahoma.

It’s a reality issue. The huge canyon separating the opposite perspectives alone, even though it seems counter-intuitive on a local level because of conservative support for capital punishment, means the beginning of the end here for the death penalty in Oklahoma. Good riddance. We don’t need it here, and we don’t need the worldwide condemnation that goes with it.

Here’s the narrative about Oklahoma to the outside world created by leaders such as Gov. Mary Fallin, Oklahoma Attorney General Scott Pruitt and Oklahoma County District Attorney David Prater:

Oklahoma is the home of burn-them-at-the-stake zealots who worship the death penalty as a sort of ideological and litmus-test idol that goes far beyond a simple belief that it deters crime. It’s not even eye-for-an-eye justice, which would make more sense in a right-wing state filled with Christian fundamentalists. It’s much more perverse than that. It’s borderline ritualistic killing for its own sake, an ordinary practice here, a grotesque yet routine political tic, rather than a deterrent. It’s a human sacrifice to honor the sickness of self-righteous hubris.

CNN, The New York Times and the Los Angeles Times have published editorials against proceeding with the execution. Actress Susan Sarandon, well-known anti-death penalty activist and Dead Man Walking author Sister Helen Prejean and British billionaire businessman Richard Branson have spoken out against the execution. Locally, former University of Oklahoma football coach Barry Switzer and, of all people, former U.S. Sen. Tom Coburn have asked for a stay of execution. That’s such a small sampling of the highly visible protest the case has generated.

As Scott Martelle, writing in the Los Angeles Times, puts it about the case, “This is where the death penalty gets its full exposure as a ludicrous practice.”

Here’s a review of the case containing significant links from my last post. My purpose here in this specific post is not to go through the case again. Anyone following the case knows that on Wednesday Glossip was granted a last minute stay of execution by the Oklahoma Court of Criminal Appeals for two weeks. He’s now scheduled to be killed by lethal injection Sept. 30 unless a court can be swayed otherwise for a murder no one has ever accused him of physically committing.

The response to Glossip’s pending execution and the murder case itself from the state leaders I mentioned earlier has been telling. Oklahoma County District Attorney David Prater, who didn’t even prosecute the case, called the effort to stop Glossip’s execution a “bullshit PR campaign.” Gov. Mary Fallin has stoically and repeatedly used a version of this generic sentence in her statements: “After carefully reviewing the facts of this case multiple times, I see no reason to cast doubt on the guilty verdict reached by the jury or to delay Glossip’s sentence of death.” Pruitt’s response to Glossip’s temporary stay of execution contained similar generic, stock-photo language:

Confidence reigns when it comes to deploying the death penalty in Oklahoma. State leaders are utterly certain of Glossip’s guilt; by default, we can assume they entirely endorse his death sentence and the death penalty in general. No reason to do anything then, the reasoning goes, among THE leaders. Anyone who argues otherwise is, well, they’re full of BS, as Prater puts it. This is what the world is hearing these days and will continue to hear in the days to come about Oklahoma, which leads the nation in executions on a per capita basis.

People throughout the world are shaking their heads in disgust at the cavalier treatment of a person’s life in this irrational legal case.

The counter argument we hear is that in 1997 Van Treese was beaten to death by a man with a baseball bat in a motel room in Oklahoma City, and he was treated the worst of anyone in this quagmire of blood, loss and media spectacle. But it goes without saying his death was a terrible tragedy. Here’s the important caveat: It wasn’t Glossip who killed him. The murderer was Justin Sneed, who received life in prison instead of death for the killing in exchange for testifying that Glossip asked him to do it.

Fallin, Pruitt and Prater don’t claim Glossip physically killed Van Treese. No one does. Yet these three leaders want Glossip to die while conceding implicitly at least that Van Treese’s actual killer should live. In other words, they believe justice will be served under this frame of illogic.

Not one of these state leaders has fully addressed the issue of why someone can be put to death in this country based almost exclusively on the testimony of a murderer who is trying to save his own life. Such plea bargains might make sense in dealing with non-death penalty punishment crimes, such as armed robbery, burglary or fraud cases, especially when there is extensive corroborating evidence, but the death penalty is irrevocable, and thus such bargains in these cases are immoral, unethical and unconstitutional.

Glossip’s attorneys are presenting new evidence they hope will show he wasn’t an accomplice in the murder. Whatever the outcome of this case, this is the beginning of the end for the death penalty here in Oklahoma and perhaps elsewhere in this country. It might take a while, but this is a turning point. Too many people are paying attention now.

The Glossip case shows starkly that the death penalty is applied arbitrarily, capriciously and unfairly. Its legal application is so illogical, as historical documentation clearly shows, that it defies any semblance of rationality. The government consistently and mistakenly kills innocent people charged with murder. It’s blatantly immoral because of this documented fact alone. Most Western and enlightened countries, and many states in this nation, have banned or don’t practice the death penalty. Even Nebraska banned it in May.

The only government-sanctioned execution that needs to happen should be inflicted on the practice itself. Death to the death penalty. Meanwhile, Oklahoma leaders and those in the criminal justice system here should show some basic mercy and apply some basic logic. Let Glossip live.